Leaders in growth: predict among the “350 magnifiche” smes of italy 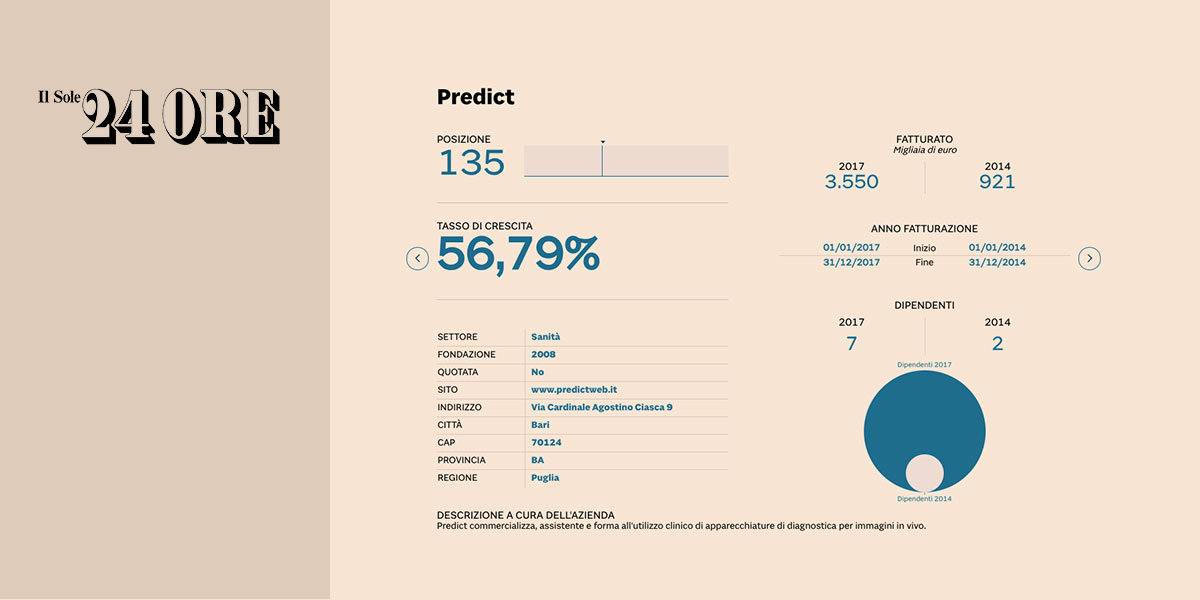 Predict has been ranked 135th in the list of the top 350 companies “Growth Leaders 2019” recently promoted by Il Sole 24 Ore and Statista.

The most authoritative Italian economic newspaper has partnered with the international data provider based in Germany, to study the growth of about 6000 Italian companies across different industrial sectors.

A similar investigation carried out by the newspaper La Repubblica together with the German Quality and Finance Institute, had been already identified Predict among the 300 Italian companies “Champions of Growth” between 2013 and 2016.

With regard to the survey carried out by Statista and Il Sole 24 Ore for the three-year-period 2014/2017, the criteria for inclusion were strict: a revenue of at least €100,000 generated in 2014, and of at least €1,5m in 2017. In addition, the company had to be headquartered in Italy and it had to be indipendent (there were not included in the survey companies subsidiary or branch office of any kind).

Predict, the company operating in the healthcare field, has achieved in the three-year period a strong organic revenue growth of 56,79%; this growth has reflected the corresponding growth in the number of employees and in the commitment in research and development activities.

Among the main innovations there is OPTIP, the integrated communication technology via holopresence that allows the interaction among several users in remote, improving the work and internal coordination of a team, and Mistral, the device born from the research cluster “Inside the Breath”, which works by applying the breath analysis to perform early diagnosis of cancers.